How does red rust form? 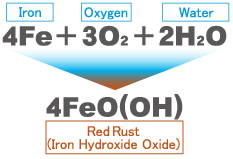 How to stop formation of red rust

The other way around, the formation can be stopped if electrons are supplied to iron that lost electrons.

This method is called an electrolytic protection.

How is red rust reduced to black rust.

Existing red rust can be reduced to black rust by supplying electrons to it continuously. 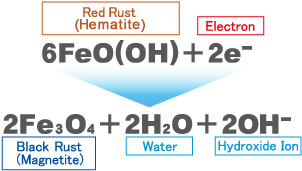 Black rust is passive as a substance: it is highly resistant to oxidation and does not dissolve in water. Its cubic size is 1/10 of that of red rust. Black rust functions as protective coating on inner surface of pipework. This extends life span of it for more than 40 years.

Conventional pipe cleansing methods, such as flush-out and chemical cleansing, cause red rust to flow out of pipework. They are just putting off the problems. Moreover, a flush-out reduces pipe thickness and wears out inside piping and eventually accelerates further formation of red rust that shortens the life span.