The Pipetector is an electrolytic protection using free electrons of water. Free electrons are generally located inside larger water clusters in a liquid-state. 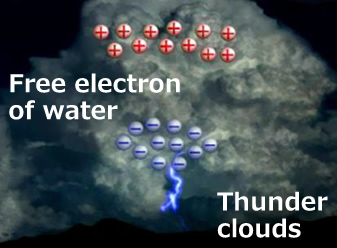 ・This phenomenon is often compared to a thundercloud where smaller water clusters move rapidly.

A hydrogen nucleus of water molecule has North and South magnetic poles. The nucleus resonates when it receives a specific wavelength of electromagnetic waves. This is called nuclear magnetic resonance.

The Pipetector generates a specific wavelength of electromagnetic waves and breaks up water clusters smaller.

This phenomenon lasts for more than 6 hours.

・Black-body radiation is a theory that any materials in the world can emit electromagnetic waves without supply of external power source.

・Ceramic and charcoal are some of the examples of black body. When ceramic products are sintered at 1,200 degrees Celsius during their manufacturing process, they store a thermal energy within. This energy (entropy) decreases by itself as the time passes by, and thus the ceramics emit electromagnetic waves.

・Charcoal products are carbonized at over 800 degrees Celsius when manufactured and store thermal energy inside as well. Charcoal thus emits far-infrared rays as the entropy decreases.